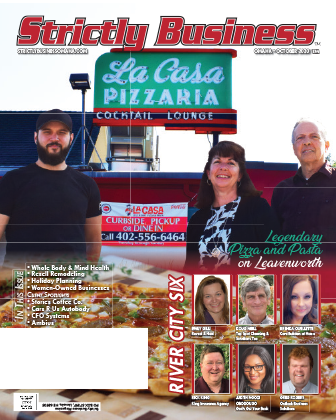 It was 1953. An eventful year in America. Air Force test pilot Chuck Yeager would set a speed record in the Bell X-1 aircraft. TV Guide debuts. Sir Edmund Hillary would be the first to reach the summit of Mount Everest. And, somewhere in Omaha, probably as the Red Skelton show echoed in the background, La Casa Pizzaria (lacasapizzaria.net) Founder Joe Patane was convinced that Omaha was ready for some great Neapolitan pizza. An Omaha staple was about to be born at 4432 Leavenworth. Halfway through La Casa’s first evening of service, the family ran out of food, indicating Patane’s hunch was correct. Since then, La Casa has served patrons far and wide with its classic recipe.

Beyond their perfecting of Neapolitan-style pizza, La Casa has so much more to offer with their wide variety of menu items. The long list of appetizers is followed by several options including pasta dishes, paninis, salads, and soups. To complete the dining experience, La Casa has amazing desserts, including their famous cannolis that are offered in four flavors.

La Casa on Leavenworth offers dine-in, carry-out, and curbside pick-up for a touchless option. You can even let La Casa cater your next party or social event—business luncheons and meetings, too! The La Casa food truck is also available for events. Serve your guests or employees from ‘La Casa on Wheels’ offering a menu that includes something for everyone. And, if you’re craving that Neapolitan-style pizza far away from where it all began, it can be shipped anywhere in the United States.

The third and fourth generation of Joe’s family invites you to share in a part of Omaha’s restaurant heritage, La Casa Pizzaria, still operating in their original location at 4432 Leavenworth St. The restaurant also features a party room available to rent out. It comfortably accommodates 25–55 guests. Your group can enjoy a buffet of delicious pizza and pasta with the La Casa staff handling all details while you relax.